Qin Talk (15-20 minutes each person)
Andre - Qin And Composition, he will demonstrate on the qin  -- postpone to next yaji
Joe - Qin, Tea ceremony and Yang Li-ping's Dancing
Peiyou - About Wúmén Qin School 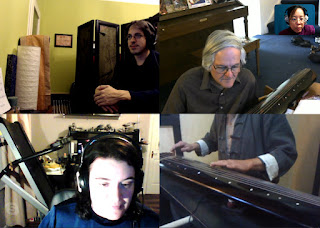 Clips of the qin playing and talks


Joe talked about his trip to China this summer, including his, his wife's, his son's and daughter's learning of the guqin with Rachel who runs an Airbnb at Cheng-du in Si-chuan province with culture experiences of guqin learning, tea ceremony and dressing in traditional Chinese Han costume, and the dance show of Yang Li-ping that they saw.

Joe also gave his impressions of the qin playing styles between Chuan 川派 and Wu 吳派. Since Rachel is from the Chuan area, Peiyou then following this concept of qin playing styles influenced by different areas, talked about Wúmén Qin School.