Music from the Spiritual Mists of China: the Qin 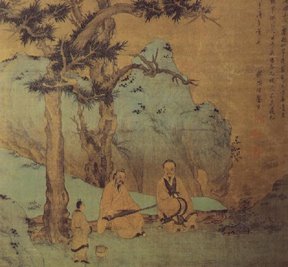 The New York Qin Society is giving its annual public performance event on June 4th at 5:00 pm. It will be held at Renee Weiler Concert Hall, Greenwich House Music School, 46 Barrow Street, NYC. Select members will play ancient and more recent music on the qin; this will be complemented by short discussions of some of the more intriguing aspects of the instrument and its culture. Admission is $15, or $10 for students and seniors. For further information, call (888) 414-SING or email: info@newyorkqin.org.

The qin (pronounced “chin”; also guqin, “ancient qin”) is a seven-stringed zither played with silk or metal strings and has been associated with self-cultivation and Chinese art, literature and philosophy since the time of Confucius. Familiar to many Westerners through the movie Hero, it nonetheless remains little known, even in China. Its performance tradition dates back to China’s classic era and is transmitted to us partly by oral tradition and through mastery of a detailed and unique notation that has been in use for over a millennium.

Participants will include noted scholars as well as performers. Mingmei Yip, a qin player, calligrapher, and artist with an international reputation, received the first doctorate in qin studies from a Western university, and has written two books and numerous articles on the qin. Bo Lawergren is an expert in Asian instruments and has contributed over 50 articles to journals all over the world. Marilyn Wong-Gleysteen is an art historian now concentrating on music and the arts related to the qin and its performance. John Thompson, who has played qin since 1974, reconstructs and performs early qin music; he has made 7 CDs and his website, www.silkqin.com , is perhaps the richest online English-language qin resource. Peiyou Chang performs regularly on the qin and maintains an English and Chinese website devoted to the qin at guqin.tcfb.com. Stephen Dydo is currently president of the NYQS; an accomplished performer, he has also composed qin music and has built several instruments.

The New York Qin Society is the only organization on the East Coast devoted to the qin. NYQS was formed in 2000 by a group of musicians, artists, writers and Sinologists to explore and enjoy the music and culture of the qin. Although its initial focus was the education and enjoyment of its membership, it began to give public events in 2001. Since that time, it has held performances in various venues on the East Coast. The June 4th performance inaugurates a partnership with Greenwich House Music School (website at www.gharts.org ), which has been serving New Yorkers since 1905.