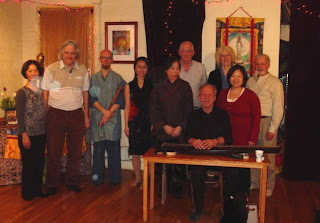 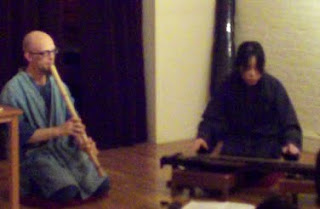 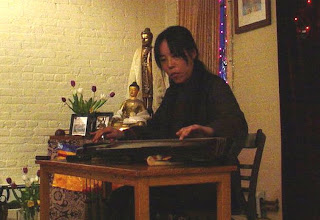 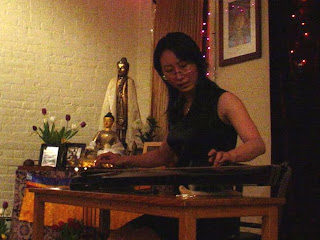 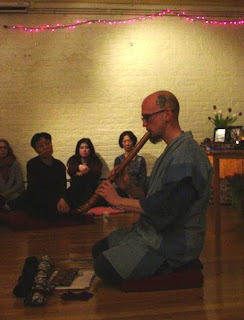 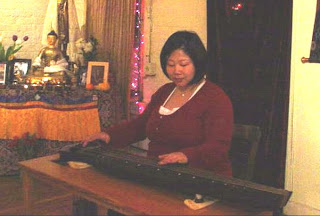 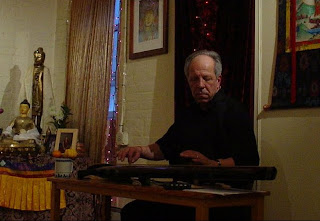 Stephen talked a brief history of guqin and played Pu An Zho 普庵咒 and Kongzi Du Yi 孔子讀易.
Videos:
Guqin and Shakuhachi Duet -- Kyorei (Empty Bell)
Peiyou and Glenn's Guqin and Shakuhachi Duet - Kyorei
(For a louder sound of guqin of this duet, one can listen from the link below, since this was recorded in a different day so the playing has slightly different from the video above:
http://www.peiyouqin.com/sounds/01-DR-consolidated-110403_0951.mp3)
Shakuhachi -- brief history talk and playing (partial) by Glenn Swann
Glenn's talk and partial playing of Shakuhachi
Guqin -- Three Variations on The Plum Blossom 梅花三弄(partial) performed by Peiyou Chang
Peiyou's playing of Mei Hua San Nong (Partial)
Guqin -- Changmen Yuan 長門怨 performed by Judy (Shih-hua) Yeh
Shih-hua's playing of Changmen Yuan with Jennie's explanation of the story.
It was really a great night. Approximately 35-40 people came. It was a bigger event then what we were expected. Peiyou's husband helped to record some videos and Shih-hua took most of the photos.
Stephen Dydo, the president of New York Qin Society started the event with brief explanation of Guqin and its culture, follow by his playing of Pu An Zho and Kongzi Du Yi.
Shih-hua then played Chang-men Yuan and Ao Ai. She also did some demonstration on some parts of her playing along with Jennie's very helpful English explanation and both made the audience understand much better about these two pieces.
Peiyou then played Mei-hua San-nong to convey her best wishes to the lost of Japanese and hope Japan can be as strong as Plum Blossom that no matter how hard the life environment is, they will still survive and still blooms and dances in the wind. The 2nd piece Peiyou played was Yi Gu Ren. The theme of this piece is the longing for familiar things or persons or having memories of the past yet with no one to tell. Therefore thinking of an old friend and wanting to tell but being unable to reach the friend. It is a very emotional qin piece which has the impression of feelings lingering.
Jennie as a qin beginner was not prepared to perform, but I encouraged her to the front and I am very proud of her that she managed to play through the Yang Guan San Die with a short singing, in a very calm manner. She also did a wonderful job of helping Shih-hua and Peiyou for English translation.
Our guest, Glenn Swann had a brief explanation of Shakuhachi and played two very nice solo pieces. The final piece was the duet of Guqin and Shakuhachi. Peiyou arranged the guqin part to play along with Glenn's Shakuhachi. I myself love this piece very much and many thanks for Glenn's suggestion to pick this piece as duet.
Peiyou Chang
Posted by Guqin at 11:44 AM