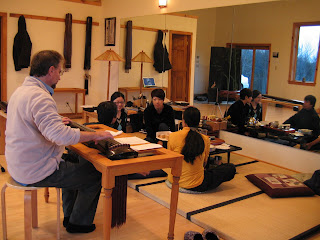 The Nov. 20th Guqin Yaji was really pleasant. Everyone came from at least two hours away and gathered at Zhong Dao Tang which really make it very special. While girls were preparing food, Sam and Mr. Song were practicing Chen style Taiji outside. From Yuni's kitchen window, we saw their practicing and I was really impressed with Mr. Song's 身手, as a 蛟健的 young man. (Here is a clip from Zhi-yu about Renjie's practicing of Chen Style Taiji in front of Zhong Dao Tang with the instructor Sam's correction. Mr. Song has been practicing Chen style Taiji for one year and one month so far. He learned from Master Chen Zheng Lai 陳正雷 and Sam Zhang.
http://www.youtube.com/watch?v=uWqHdECtvKo)

Mr. Song (a self tought qin player and maker, www.songstudio.us) talked about his qin making story and showed his two qins. Please see the attached videos for his talk. Sam saw that Yuni has many different kongfu tools so he was playing with those 關刀, 劍, and some of us were following his movement while he was doing the sword.

For Qin playing -- Zhi-yu played Chang Men Yuan 長門怨 and Qiu Feng Ci 秋風辭 with singing. Sam played Guan Shan Yue 關山月, and Shi Shan Liu Quan 石上流泉. Renjie played Pu Xue Zhai's Liang Xiao Yin 溥雪齋版本的良宵引. I played Sheng Ren Chang 神人暢 and talked about my interpretation of this qin piece with Qu-yuan's poem "Mountain Ghost" 屈原的山鬼. Before that, I played Mei Hua San Nong 梅花三弄 on Renjie's unfinished Knee Qin 膝琴 (or lap top qin) which is shorter than regular qin and this qin has very nice deep sound. When I played it, I can feel that it is a qin full of energy and purity. The purity is not the mechanical sound quality, as it is an unfisnihed qin, the surface and the Yue mountain still need some fine treatment. What the purity I mean is the qin makers' heart. I really enjoy playing it.

Guest, Andrew (www.andrewfranck.net and www.theartofporosity.net/About.html) is a very interesting person, according to his friend Nan Nan 楠楠, who is from Beijing and had been working in art field as a director of two art galleries in Asia and New York for last past 10 years. Nan said that for her, Andrew is like a 神人. He is not only a composer, artist, philosopher and author; he is also like a psychotherapist... Andrew likes the sound of Guqin and so even he had never touched qin before, in the Yaji, after he saw our playing and talks, he just found himself quietly seating in one of the qin table and practice guqin while several of us were having our tea time. He was probably already composing a new piece in his mind at that moment.

Time always goes so fast and outside looked like 9pm dark but it was only 6pm. People had to head home for the new week in front of us. We know we will meet everyone again...