On 9/16/2017 evening 7:30pm, I played a solo piece, from the 17th century, Wild Geese Flock to Sandy Shores 平沙落雁, and a duet piece, from 1989, Falling Plum blossoms 落梅 with Renjie's Xiao (bamboo flute) at the event, Cabaret at Maple Ridge, located at Cambridge NY, organized by an art collector from NYC, Mr. Larry Sconzo and qin friend, Renjie Song. There's about more than 60 to 80 audience from local villages, they are great people. 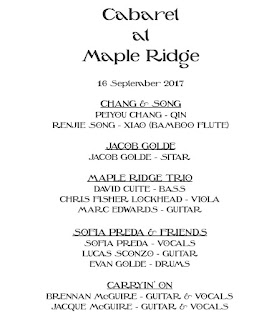 Found in both Chinese painting and poetry, geese were taken as symbols of a lofty mind and high aspirations.

A poem from qin master Wu Zhao Ji (1908-1997) described the image of this piece: In the crisp autumn weather, the wind is silent over the level sands, The clouds stretch endlessly across the horizon, the wild geese calling.

In this piece, one can hear the sound of geese taking off, landing, beating their wings in the wind, and calling to each other.

According to Mr. Tse, The Falling Plum Blossoms is a duet of qin and xiao (vertical bamboo flute) composed on the Bianzhi (#fa) scale in the traditional form of qin music. These two instruments have been brought together by free counterpoint instead of the traditional unison.

The music describes the sorrow of LI Yu (937-978), the king of a subjugated nation (Nan Tang), as expressed in a poem of his, "Like heavy snow the plum blossoms fall, I sweep time and again but cannot get rid of them all."

The whole translation of the poetry is as follows:

Since separated, spring has half passed.  The scenery into my sight brings more sorrow. Like heavy snow the plum blossoms fall on stone steps. I sweep time and again but cannot get rid of them all.

Wild geese came back but not bringing any message for me. The road is so far that even dreaming to go back is difficult to achieve. The regrets of departing is like spring grass, when going further and further, they grow more and more.

Put a little bit the music together. 請聽部分琴蕭音樂剪輯. I like the cricket sound at the background. 戶外黑暗一片有蟋蟀聲作伴
Photo of the duet, Courtesy to Mr. Locus Sconzo

Gratefully thanks to the Qin friend, Renjie who invited me to this wonderful event and taking very good care of me and my husband at his neck of the woods, Saratoga Springs NY.
Posted by Guqin at 10:26 AM